Schedule your no-obligation consultation with our team at The Chiropractic Neurology Center of West Greenwich in West Greenwich to learn if our services are a good fit for you and your family.

The difficulties start in the brain. Find out how and what to do about it. Get started with our no- obligation consultation.

During the Consultation you will find out:

HOW WE CAN HELP?

Neurofeedback is clinically proven, non-invasive, and drug-free. It has been proven to provide long lasting results after treatment. Biofeedback is recognized by the American Academy of Pediatrics as a Level 1- Best Supported intervention for attention and hyperactivity behaviors.

Many people do not know that their struggles and challenges are caused by the way their brain is performing. At our Neurofeedback office, we can show how your brain is causing your symptoms and what to do about it.

WHAT IS A qEEG BRAIN MAP?

State-of-the-Art qEEG Brain Mapping is used to identify the neurological brain patterns that are at the root of people’s symptoms. It is like an X-ray of your brain’s performance. It is completely non-invasive (doesn’t do anything harmful to you) and provides a wealth of information about how your brain is contributing to your symptoms. The doctor can see if your brain is using the irregular brain that is associated with your challenges and then will show you. When you look at your brain map you will know exactly what needs to happen to make your symptoms decrease.

Neurofeedback has been used for over 60 years and has many scientific studies that show its effectiveness. Neurofeedback Therapy is proven by science to improve those brain patterns that cause ADHD, anxiety, and more and reduce the symptoms people experience. It is so effective it is endorsed by the American Academy of Pediatrics and the American Psychological Association as a Best Level support.

HOW DOES NEUROFEEDBACK WORK? 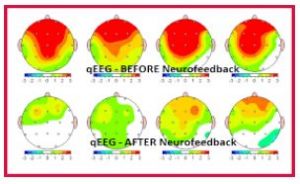 Neurofeedback, also called EEG Biofeedback, means ‘brain’ (neuro) and ‘input’ (feedback). Once an irregular brain pattern is identified using qEEG Brain Mapping, then the computer system optimizes the irregularity by guiding the brain back into a healthy pattern. With repetition of this process over time, the brain learns to stay in healthy ranges without the aid of the computer.

The result... an improvement in the brain’s ability to regulate itself and perform better. This in turn can reduce or eliminate most neurological symptoms caused by the original irregular brain pattern. Unlike many other treatments that address the symptoms of neurological disorders, neurofeedback therapy trains the underlying source to alter the structure and function of the brain. As such, many patients in West Greenwich report permanent positive changes to their behavior months and years after ending the therapy. The results are proven by science too.

The premise of Neurofeedback Therapy is founded in a science study that most people have heard of and is over 110 years old called Pavlov’s dog. Pavlov, a scientist, taught dogs to drool in the presence of food (the reward) and then took the food away and they still drooled. This is called Classical Conditioning. This study proved that brains could be conditioned, or taught, to change their performance to change behaviors based upon rewards. Taking this step further, Neurofeedback Therapy works based upon a technique called Operant Conditioning.

Operant Conditioning works through the use of positive feedback (rewards) and negative feedback (lack of rewards or consequences). For example, when your child is acting like an angel and you give him lots of praise and a lollipop, you are inadvertently using Operant Conditioning. If you do not give him praise and actually give him minimal attention when he is not using great behavior you are using operant conditioning again. Through a system of rewards and lack thereof, the brain learns what behaviors are desirable and which are not.

Neurofeedback Therapy capitalizes on Neuroplasticity, the brain's ability to heal itself through this learning process. The brain receives a reward in the form of auditory and visual feedback when it is has proper brain signal use. This positive feedback is delivered in the form of a hum to the ears and a brightening of the computer screen visually for the person. If the person’s brain does not use the new better brain pattern, the hum decreases and goes away and the screen becomes dim. This is the lack of the reward. If the brain signals fall very far out of the desirable pattern, the brain receives a correction in the form of a ding to the ears and darkening of the screen altogether. In this way the brain learns to improve its performance by working for the rewards and avoid the negative feedback.

HOW DO I KNOW NEUROFEEDBACK IS WORKING?

Each visit for Neurofeedback Therapy records a performance graph of your brain functioning. Thus, you can see within each session and across sessions if indeed your brain signals and brain pattern are changing. With the change in pattern comes relief of symptoms.

WHY HAVEN'T I HEARD OF NEUROFEEDBACK?

Scientific understanding of how the brain works has been changing and evolving so quickly over the past 20 years that it is almost unfathomable. In fact, just ten years ago scientists believed the brain was static and unchangeable after the early years of life. You have probably seen in popular magazines and newspapers that now scientists know that the brain is dynamic and can be pushed to perform better over the course of your lifetime through a concept known as neuroplasticity. This is an important shift which makes it the perfect time to capitalize on that knowledge to help yourself or your child.

Neuroplasticity (the brain’s ability to learn and change through life) is now the focus of scientific inquiry rather than ridicule as it was a decade ago.

Neurofeedback employs a sophisticated, evidence-based approach with measurable results.  It is backed by 65 years of science showing that it works clinically to help people reduce symptoms. Still, old ways of practice can take a long time to be extinguished while new ways can take too long to gain traction. Thus, the brain sciences have advanced so quickly, that few medical establishments have yet to integrate approaches based on this new view; hence many practitioners do not even have a basic understanding of neurofeedback or its clinical applications. Forward thinking practices as our self and the world-renowned Amen Clinics, of which we are an affiliate center, use qEEG Brain Mapping and Neurofeedback Therapy as a crucial aspect of therapy for challenges of the mind and body

Neurofeedback Therapy is used by professionals around the world to teach children with ADHD how to calm their mind and concentrate, and is rated Level 1 ‘best practice’ intervention for ADHD by the American Pediatric Association. Children with learning challenges are seeing gains in behavior and performance as they organize and stabilize their brain patterns.

NASA uses neurofeedback to train astronauts. The US military uses it to train their Special Forces, and have adopted neurofeedback as a new intervention for PTSD and traumatic brain injury (TBI).

Because it is not harmful at all and it improves focus, productivity, and stress many peak performers in all fields are now using and endorsing neurofeedback. Tony Robbins, multi-millionaire business man, musicians at the Royal Conservatory in London, the Women’s Olympic volleyball team (Kerri Walsh Jennings and Misty May Trainor), NBA player Chris Kaman, and the entire Vancouver Canucks hockey team are just a few to mention. Neurofeedback helps them stay calm under pressure, tap into their creativity, and implement the necessary strategies so they can succeed.

Disclaimer: These statements have not been evaluated by the Food and Drug Administration. These services are not intended to diagnose, treat, cure, or prevent disease.

WHAT CUSTOMERS ARE SAYING...

"At the Chiropractic Neurology Center of West Greenwich, I receive Braincore Neurofeedback Therapy from Danielle and I also use the Bemer (PEMF) at every session. Neurofeedback is a quick, easy, painless, and what feels like effortless therapy that is targeted to help with ADHD, anxiety, depression and more. I came here originally to speak about neuro-chiropractic care to help with my POTS syndrome symptoms (brain fog, fatigue, anxiety, and more). When I was told that Neurofeedback would be the most beneficial treatment, I was intrigued and committed soon after. At about halfway through my treatment, I am feeling SO much better. I firmly believe that Neurofeedback, along with other lifestyle changes, has made a positive difference in my symptoms. I would definitely recommend this treatment to anyone struggling with any of the health conditions the center uses neurofeedback to treat. Danielle makes you feel comfortable and the whole staff is kind and welcoming, and overall my experience has been nothing but great!"

"Thank you for all the hard work & continued dedication, this means so much to us. We could never have "opened up" or "unlocked" our child in this way. There were so many moments before Neurofeedback when I felt like I was losing him. I can only explain it as he was going deeper "inside" of his own world.

This has given us access to a part of him we never thought possible. It's given him the ability to "show us" his perspective and explain how he's feeling. Neurofeedback has brought light where there was once darkness and we are eternally grateful for the progress we have seen right before our very eyes."

"I came to BrainCore Therapy (neurofeedback) because all of a sudden I had a fear of driving and constant worry. After my initial mapping (qeeg) and identifying the problem I could feel my fears going down. After more and more treatments I noticed other "worries" decrease as well. I was even able to drive myself on a 5 hour trip. The time that I would spend worrying has decreased, I feel more alert and I definitely feel like myself again! The staff was amazing in listening to me and trying to help me with any issues. They will be missed!"

"My son had generalized anxiety and social anxiety as well as ADHD and some OCD symptoms. Through the BrainCore therapy he has stopped taking meds and has shown vast improvement in his behavior and coping skills. The technicians, Danielle and Britt were excellent with him and Dr. Morrissette was great in answering our questions and overseeing treatment."

“I am so glad we chose Neurofeedback Expert office to get Steve on track at school. He spends half the time he did on homework now. It has been a real game changer for him and us.”

“Not only did Mark's anxiety decrease, his relationships with his siblings improved and he began to make friends. Our life before and after Neurofeedback Expert office are polar opposites. Thanks.”

SATURDAYS WE ARE OPENExpand